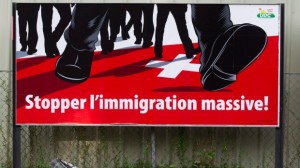 'Stop mass immigration!' - one of the SVP's referendum campaign posters.

On 9 February, a small majority of Swiss voted in favour of taking measures to ‘curb mass immigration’. For a country whose economy and public services rely heavily on immigration, this was an astonishing sign of abandoning common sense and rational thinking to emotional fear-mongering by the leaders of the nationalist SVP. It’s what you can call an ‘own-goal’, if you like football metaphors.

Unfortunately, some of the outraged comments were, in their superficial simplification, as ‘populist’ as the vote they criticised. This was visible, for instance, in the attempts to use football in order to ridicule the Swiss ‘yes’ voters. Some media showed a picture of the Swiss national team on which the numerous players with migrant origins were erased, in order to highlight how apparently inconsistent the Swiss voters had been and what disastrous results their ‘xenophobic’ attitude was bound to produce.

Of course, the racist and islamophobic undertones of the last week of the SVP’s referendum campaign were nauseating. But the vote was mainly about introducing curbs or contingents for migrants from EU member states, whose free movement is ‘imposed’ by the EU. For third-country migrants – whether from South-Eastern Europe of other continents – Switzerland has always been in a position to define contingents or quotas, and it has been rather generous in doing so.

And the national football team precisely illustrates this fact: since 2012, the team has lined up no less than 18 players with migrant origin, but only a single one of them comes from an EU-27 member-state (Tranquillo Barnetta’s great-grandfather was an Italian immigrant…). In other words: rather than highlight the fallacy of the referendum vote, the current composition of the Swiss national football team gives evidence to two decades of perfectly appropriate migration provisions for refugees from the Yugoslavian civil war (10 of the 18 players have roots in former Yugoslavia).

What does this episode say about football in the context of migration debates? It provides three healthy reminders:

First of all, it recalls that football is a wonderful source of metaphors, but it has its limits and sometimes it’s better to think twice before drawing hasty and false comparisons.

Secondly, national football teams in countries like Switzerland, but also Germany, France or Belgium, may provide concrete and understandable illustrations of the co-existence of multiple identities and loyalties in societies marked by decades of migration. This is encouraging. They also serve as an example to other countries whose citizenship law has remained way behind the evolution of society. What they cannot do, however, is put an end to deep-rooted globalisation anxieties that remain exploitable by ruthless nationalists any time.

Finally, populists do not have the monopoly on populist shortcuts. Righteous indignation, especially when hastily expressed and unreflected, is just as prone to scoring own goals.

One Response to Populist own goals