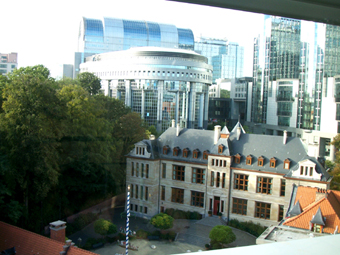 A stone's throw from the European Parliament: the Bavarian 'Landesvertretung' in rue Wiertz.

The most impressive ‘permanent representation’ to the European Union in Brussels is not the French, British of German one, but that of a region: Bavaria. The beautiful ‘château’ just some meters from the European Parliament has been considered megalomaniac by some observers, but is calmly defended by its inhabitants as an excellent real estate investment and thus good use of taxpayers’ money. My students generally simply love it, just as they appreciate the very nice welcome there, the self-confidence that emanates from it, as well as the excellent coffee and bretzels they usually receive. They are seduced by a country that likes to see itself as Europe’s model region, combining a strongly rooted cultural heritage and identity with world-leading high-tech industry and research: ‘Laptops and Lederhosen’ as they call the fascinating mixture themselves, referring to the infamous folkloric leather trousers.

And now Bavaria even won, on behalf of Europe, the so-called FIFA Club World Cup, a tournament that brings together the current winners of the different continental Champions Leagues (a secondary event in the calendar, but a trophy coveted by the players). Bavaria? We are speaking, of course, of the football club that by its very name almost arrogantly claims to represent Bavaria: Bayern Munich.

Bayern has won pretty much anything that there is to win in 2013. But most strikingly, they managed to become the undisputed number one in Europe with an economic governance model that is very different from current practices in the English PremierLeague and elsewhere. Imagine a professional football club that has built an economically healthy, profitable and sustainable business model on very stable management structures. Difficult, I agree. No wonder the English press shows itself intrigued and impressed by the Bavarian way of doing things.

Journalists are not alone in their admiration. Bayern’s main competitors have started to take the Bavarian model very seriously. Some quotes from recent months that may illustrate a new trend: 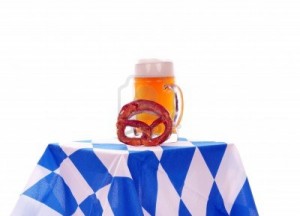 Identity: bretzel, beer, and the Bavarian white and blue 'tartan' that is in the heart of the club's emblem.

They are not wrong. Protected by the German ’50+1 rule’, which stipulates that no corporate investor may take over more than 49% of a football club, and counting almost 200 000 individual members, the club has chosen its corporate partners very carefully and manages them in long-term relationships: apart from the usual sponsorship pool of ‘premium partners’, two Bavarian companies – Adidas and Audi – hold 9% of the Bayern shares each, while Munich-based Allianz promotes its name through one the world’s hottest looking stadia. At the same time the club’s identity is firmly rooted in its ‘we are what we are’ attitude embodied by a series of highly loyal home-grown player icons such as Schweinsteiger, Lahm, Müller, Alaba and Kroos and adopted by international stars like Ribéry and Martinez.

There are plenty of reasons not to like Bayern (especially if you have the bad luck to support any other German club…), but it’s difficult not to admire the way they have patiently managed to set up a model of sustainable growth in an irrational business like football. Like for all successful models, though, the real challenge begins when you have reached the top: it’s a thin line between being admired as an example and being despised as self-complacent know-it-all.

A first version of this blogpost was published on www.free-project.eu/Blog.