125 years ago, on 9 November 1888, Jean Monnet was born in Cognac. A good reason to post an exceptional ‘European Throw-In’ that, for once, has nothing to do with football, but a lot with Europe. 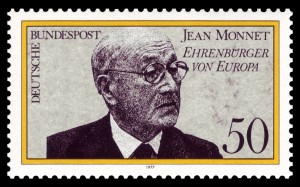 On 9 November 1988, the centenary of Jean Monnet’s birth was commemorated and honoured by the French Republic: in a grand ceremony that felt slightly out of sync with the modesty and lack of personal ambition that had characterised Jean Monnet’s life and work, his remains were transferred to the Pantheon. This was the time when François Mitterrand wanted to cultivate his (mostly usurpated) reputation as a ‘great European’, when the European Community was still (very conveniently) limited to the Western side of the Iron Curtain, when the completion of the Single Market scheduled for 1992 was full of promises. Had a referendum on a ‘European constitution’ taken place at this moment, there would have been no doubt about its enthusiasic outcome.

25 years later, times have changed. There is virtually no mention of Jean Monnet. Nothing in the media. Nothing in the statements of politicians. No official visits to the rather humble cottage in Houjarray, a 40-minute drive from the Assemblée nationale. On the contrary: all the attention is on Charles de Gaulle, whose death on 9 November 1970 attracts each year a hord of politicians and cameramen to his tomb in Colombey-les-deux-Eglises, located in the middle of nowhere in the countryside of Lorraine. This year, even some Socialists (!), and the Vice-President of the Front National (!!) pay tribute to the man their respective parties have hated for as long as they can remember.

It is characteristic for the Zeitgeist in France that the champion of national interest, sovereignty and grandeur occupies centre stage, while the promotor of the common interest, interdependence and integration is not even mentioned. In her recent pamphlet against the ‘re-nationalisation’ of Europe, MEP Sylvie Goulard points out to how Europeans seem to abandon themselves to an attitude of ‘voluntary servitude‘ imposed on them by national leaders eager put away in the cupboard of history everything Jean Monnet and the famous ‘méthode communautaire’ had stood for. The innovative supranational project seems to have lost its legitimacy; the well-engrained, century-old intergovernmental habitus has taken over again. National egoisms are being ‘heorically’ defended against the interference of ‘Bruxelles’; the revolutionary principle of ‘pooling of sovereignty’ has been replaced by the reactionary demand of ‘repatriation of competences’.

Is this a temporary trend, one of the ups and downs of an ongoing European integration process? Or is this an irreversible closing of a parenthesis that lasted some decades but whose time is over? Jean Monnet would no doubt opt for the former. In his excellent biography, François Duchêne describes him as an ‘incorrigble optimist’, with ‘faith in the logic of events and the essential rationality of people’. He quotes him as considering setbacks as ‘useful’, urging to build on them ‘as an asset rather than an obstacle’.

While I am waiting for a new Jean Monnet, capable of turning setbacks into assets on the way to a more united Europe, I take my modest quantum of solace where I can find it. In the subtle historical irony, for instance, that lies in the coincidence of Jean Monnet’s birthday being at the same time the date of death of Charles de Gaulle. Or in the comfortable fact that Jean Monnet’s presence in the Pantheon has introduced an ineradicable supranational worm in the apple of national grandeur. Or simply in the fact that each day, in my bus to work, when we approach the secondary school named after the European founding father, that nice recorded female voice announces: ‘Next stop: Jean Monnet’. I would like to believe that despite the Zeitgeist, there is something premonitory and inevitable about this announcement.