These days, French football is not so much about goalscoring, match results and league tables. Much of the football talk is dominated by the exceptional tax of 75% on incomes above 1 million that the Hollande government is decided to impose on all companies operating in France over a period of two years. 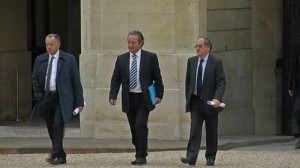 The club presidents leave the Elysée like their players leave the pitch after a lost match.

Needless to say that the professional football clubs are all up in arms against the nex tax. And they react like each other French business interest representation would react: first, they take an appointment at the Elysée. Then they try to win over public opinion through a communication campaign mobilising opinion polls and publishing ‘open letters’ to the President in major newspapers. And if nothing else helps, they threaten to go on strike at the end of November.

There is something strangely ridiculous about some of the club presidents’ arguments. According to several simulations in different media, the tax (which is limited to 5% of a company’s total payroll) would actually concern only 13 top-tier clubs, for the salaries of 115 players and 8 coaches, and almost half of the total cost of 44 million Euros would be on the shoulders of the PSG (Paris Saint Germain FC). Surely this would not be ‘the end of French professional football’ as the Union of Professional Football Clubs (UCPF) wants us to believe. Like in all other big leagues, football clubs in France are notorious deficit-makers. Due to a unique, particularly favourable configuration in the private television market, they have benefitted for over a decade from a situation in which they received a disproportionately generous revenue from their broadcasting rights. And just like in all other big leagues, any benefit a football club may be lucky enough to generate, almost automatically disappears in inflated players’ salaries. And, again, like in all other big leagues, as soon as any external factor interferes with this eternal vicious circle, the clubs cry out for help in order to ‘save the competitiveness of our football in Europe’.

There is also something shockingly indecent about considering a strike of the professional football league, when at the same time the entire region of Brittany is taking to the streets, in order to protest both against the massive de-industrialization that is hitting them and the new ‘eco-tax’ they would have to pay on their routes nationales (contrary to their European competitors using the motorway!) When a whole region is fighting for its economic survival, who is supposed to be hurt by a football strike? The government? The fans? The already overloaded football calendar? A strike would be nothing but a spectacular own goal and the already fragile image of professional football in France would no doubt take another blow. This week the clubs commissioned an opinion poll according to which 67% of the French say that ‘the clubs should not pay this tax’. But if you have a closer look, you discover that the question asked was whether it was the clubs or the players who should pay it… Another poll, commissioned by the news channel LCI, revealed that 85% of the French were in favour of applying the tax to the football clubs. In the same poll, 83% of the French consider a strike ‘unjustified’, even among the football fans on lequipe.fr they are still 67% to think the same.

Yet, despite the ridicule and the indencency, there is also something profoundly symptomatic in the club presidents’ outcry. The one thing they have in common with the thousands of protesters in Britanny is the feeling that as employers or workers they never compete on a fair and equal playing field in Europe. This may seem perfectly insignificant when it comes to football, a comparatively small business run by poorly managed SMEs whose decision-making is often determined by irrational aspects. But the complaints of the citizens of Britanny against social dumping on the European Single Market (especially through the absence of a minimum wage in certains sectors of German industry) and ecological dumping (as embodied in the ‘eco-tax’) is more than justified. In large parts of French economy and society Europe has become a proxy for a market-fetichist, neo-liberal aggressor of what the Republic should actually stand for. The result of this perception shift, which many observers have failed to assess to its full extent, is likely to become very visible in the forthcoming European elections next May.

In the meantime, the club presidents deserve, whatever their ridicule and indecency, to be praised for one achievement: more than the corruption in FIFA World Cup attributions or the scandalous conditions for foreign workers on construction sites in Qatar, they managed to put crucial political issues on the agenda of football fans. The forum pages on the French football websites provide for an interesting reading experience these days.

This post was simultaneously published in the FREE project’s blog www.free-project.eu/Blog.