Mesut Özil has style, and there’s plenty of evidence on youtube for that. 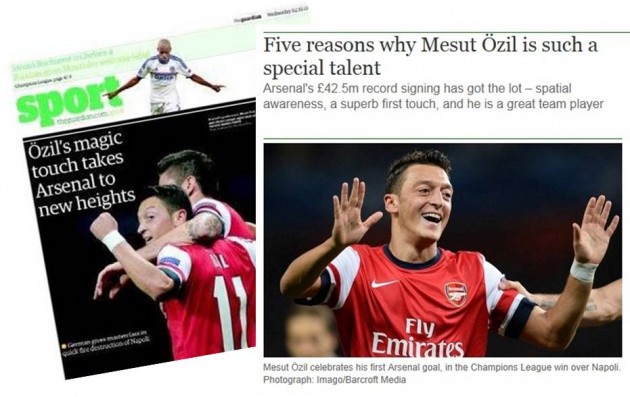 In print or online: the 'Ö' seems here to stay.

But Mesut Özil also has influence on the style of others. The Guardian to start with: for decades the British quality newspaper had stipulated in its well-known ‘House Style Guide’ that capital letters should have no accents. But Özil’s arrival at Arsenal triggered change in many ways, and the two dots have made their appearance on the capital ‘O’. It’s uncertain yet what the German midfielder might actually bring to Arsenal in the long run, but he has already enriched the Guardian’s alphabet. Would they have changed it for, say, a new Turkish prime minister or President? Chances are they wouldn’t. Such people do not appear half as often in print as an Arsenal midfielder.

This change of style recalls an episode from three years ago, when Mesut Özil was instrumentalised in order to change the communication style of Angela Merkel. When Germany played Turkey on 8 October 2010 for the Euro qualifiers in Berlin, the German chancellor was in urgent need of finding positive pictures of successful integration of second-generation migrants. At that moment, she was caught between a rock and a hard place: on the one hand, she wanted to appear as the motor behind a new immigration policy, on the other hand she had to put up with the heated debate about the fierce anti-immigration bestseller by the former central banker Thilo Sarrazin and reactionary tendencies within her own ruling coalition. 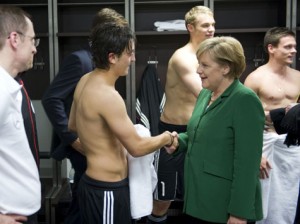 Mesut Özil was kind enough to provide her with a wonderful opportunity. Not only did he deliver an excellent performance, stoically enduring the booing of the crowd among which the Turkish community of Berlin held a clear acoustic majority, but he even gracefully accepted the chancellor’s surprise visit in the dressing room. The highly symbolic photo of the handshake between a delighted Angela Merkel and a half-naked Mesut Özil made the headlines. Interestingly enough, it was not taken by the press or the German federation, but by the communication services of the Chancellery, who very efficiently dispatched it to the entire media spectrum in no time. What looked like a spontaneous gesture had in fact been well prepared by Ms Merkel’s spin doctors.

Born in Gelsenkirchen in the middle of the ‘Ruhrgebiet’, Özil has been the first top-player of Turkish family origin to have opted for the German national team rather than the Turkish one. Was it because he felt ‘at home’ in Germany or rather because his career path to international fame would be more promising in the white jersey with the eagle crest? Probably both. Either way, it was inevitable that he would be instrumentalised by all sides in the integration debate. The Chancellor parades him as emblematic example, but others complain publicly that he does not sing the national anthem during the kick-off ceremony.

Over the last fifteen years, especially since the ‘black-blanc-beur’ euphoria around the World Cup-winning French team in 1998, there has been a lot of argument on the question whether footballers with migration background can contribute to change the style of the public migration debate within European nations. Germany find itself in between two models: on the one hand, the English and French team which have included migrant players for decades; on the other hand the almost all-white national teams from Spain and Italy. The FREE projects current European online survey (feel free to participate by clicking on the language of your choice on www.free-project.eu) hopes to find out, among many other things, how this issue is perceived in the football community across the continent.

Against Ireland, last Friday, Mesut Özil already celebrated his 50th cap for the German national team. When he was born 25 years ago, there was no perspective whatsoever to have a second-generation Turkish immigrant become a German football hero. It is well possible that in another 25 years’ time, he will simply be remembered as the first in a long row. In the meantime, he has already managed to put the points on the ‘O’. If I lived in North London, I’d quickly print T-shirts with a simple ‘Ö’ before someone else has the idea.