In fact, there’s only one who achieved both, and the name probably does not ring a bell with people under fifty. Bert Trautmann, ever heard of him? 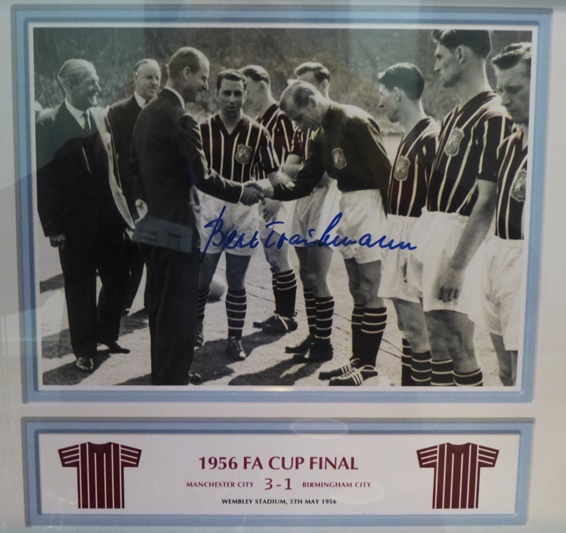 A picture taken at the National Football Museum, Manchester

Trautmann was the first German to play an English FA cup final in 1955. But it is one year later that he became a legend when he played the last 17 minutes of the victorious 1956 final with a broken neck. (The original match report by the Guardian speaks of ‘suicidal dives’ and ‘concussion’, but an X-ray three days later revealed the true nature of the injury).

In an interview in 2011, he admitted that the 1955 emotions were even stronger: ‘We lost 3-1 to Newcastle United on the day and, yes, you feel a little sorry for yourself that you lose such a huge game, but it was an amazing day and I just looked around the stadium and thought: you lucky man!’ One year later he was even luckier, not only by surviving despite his serious  injury, but als by becoming the first foreigner to be named English footballer of the year. 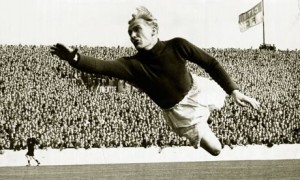 And that was only seven years after his recruitment by City had raised the fury of the fans. According to the BBC, ‘season ticket holders threatened a boycott and 40,000 people were said to have marched on the streets of Manchester to protest at the signing of a former enemy so soon after the war’.

Can a football actively contribute to reconciliation between former war enemies? In Trautmann’s case, one is tempted to say yes. It is true that when he was called ‘Britain’s best-loved German” in 1950 this ‘was not a hotly contested title in those years’, as the New York Times recalls. But over fifteen seasons with City he managed to make the Mancunians forget his nationality.

I am writing this blogpost from Manchester, quite an appropriate place from where to pay homage to this gentleman. What’s more, I am writing it from the National Football Museum, which hosts the aforementioned hall of fame. Very appropriate indeed.

Bert Trautmann died on 19 July 2013. In one his last interviews he claimed to support England, ‘even if they play Germany’. If that’s not a proof of Englishness, what is?  The Sun managed to write an obituary without using the words ‘Hun’ or ‘Kraut’.  If that’s not a proof he had been adopted by the English, what is? He had spent his last years with his wife in La Llosa, in the Spanish sunshine, near Valencia. If that’s not the ultimate English retirement dream, what is?