It is difficult to imagine fiercer football rivalries than the ones between ‘The Big Three’ of Istanbul – Galatasaray, Fenerbahçe, Beşiktaş. The clashes between their supporters – often violent, always noisy – are legendary. Yet many of the (mainly foreign) media and eyewitnessess report that the current protests against the authoritarian turn of Recep Tayyip Erdoğan’s government have produced an unprecedented unity among Turkish football fans of all colours. 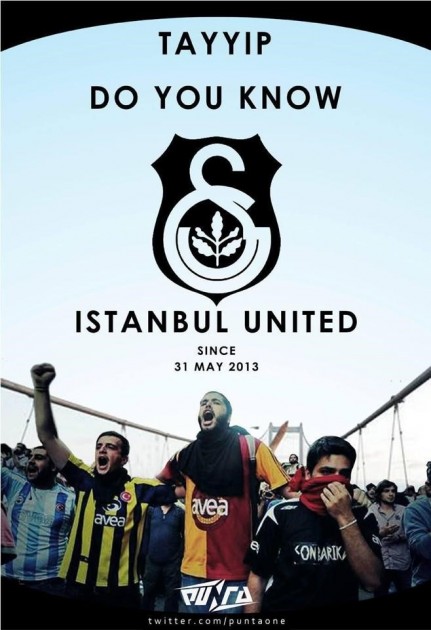 In his excellent blog ‘The Turbulent World of Middle East Soccer’, James M. Dorsey describes the supporters of the Big Three as ‘militant, street battle-hardened soccer fans’, who contrary to many other protesters have had plenty of occasions to learn how to deal with teargas and police brutality in the past.

A whole series of websites quote the almost solemn statement issued by the Fenerbahçe supporters group ’12 Numara’ (‘Number 12′), which praised the newly found unity of football fans by alluding to the colours of the Big Threee clubs: ‘We have come to the conclusion: yellow without navy blue and red, black without white is impossible. With them, it is stronger and more beautiful’.

Another oft-repeated quote is the tweet by the songwriter Feridun Düzağaç, renowned for being a Beşiktaş fan:’The pride I had when Galatasaray and Fenerbahçe fans were shoulder-to-shoulder walking to the district shouting “Beşiktaş, you are our everything” was worth everything. I am grateful.’

In a hurried E-mail message from his phone, another die-hard Beşiktaş fan, our friend and colleage Özgehan Şenyuva from the department of international relations at Middle East Technical University, related how football fans were ‘fighting arm in arm’: ‘Galatasarary and Fenerbahçe fans are also fighting their way to make it to Beşiktaş, screaming “We are coming, brothers!” Historic days in Turkey!’

No need to speculate here about the outcome of these protests. After all, they have been kicked off only recently and we may still be far from have time, let alone extra time. Also, this is not a political op-ed piece making prophesies, but simply the first ‘European throw-in’ about the numerous links between football and European society.

What the events in Turkey provide new evidence for is the inadequacy of the ‘opium-for-the-people’ metaphor which is so often made by radical critics of football. Though a tempting shortcut, the comparison doesn’t stand the test of reality. Rather than a narcotic used to tranquilise the alienated masses, football very often turns out to be a kind of ‘energy-drink’ making fans hyper-sensitive to perceived injustice or authoritarianism.

This is partly due to the places of football. Stadia are places where freedom of speech is put to the extremes, often resulting in hyperbolic insult. Places where things can be said (or rather: shouted), that may be prohibited or limited in the ‘normal’ environment. As many football scholars over the past thirty years have pointed out, football stadia have often been places of expression of dissent.

But it is also due to some features of the game itself. Football is about relentless protesting against the decisions of the authority (= the referee), who seems to be inevitably biased. Football is about suffering from the sheer injustice of the game. And football is also about needing the others, however much you pretend to dislike them, and needing them strong and in good health, because without them, there is no fun anymore. A league without Galatasaray and Beşiktaş would see Fenerbahçe win a lot more often, but where would be the interest?

At its best moments, football is even about transnational solidarity. Time to get my Beşiktaş scarf out of the cupboard. Despite today’s sunshine and spring temperatures, it’s a good moment to wear it. 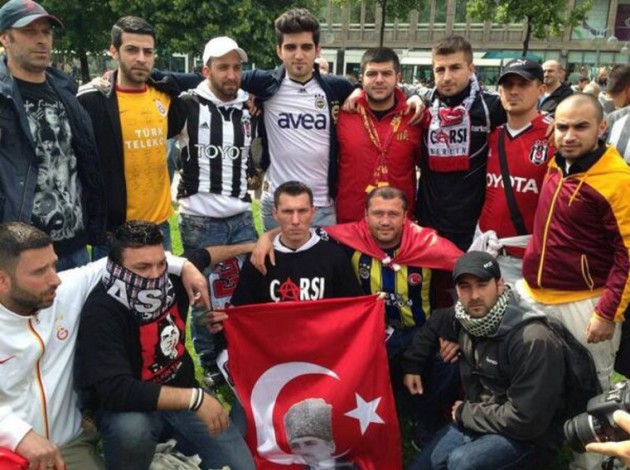